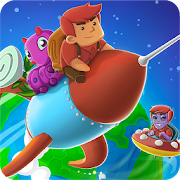 Once upon a time in the cold world of a lonely planet, the sun was born. And everything became bright and colorful. That is the very beginning of our story - the tale about the EcoBalance world.
The Sun was lonely and didn’t have friends, so it decided to travel a bit. It left the home cell and soon made three friends. When they met together, they had so much fun, that the real “ecoboom!” has happened. It became the start of the evolutionary chain - a flower was born.
Time has passed, and flowers evolved into a caterpillar.
The characters came across various obstacles - the snake attempted to block their way forward, tornados stole the strongest with its mighty blow, and earthquakes created the real mess, moving everything around.
One more happy day - a bird was born, the symbol of the unstoppable desire for life and freedom. Birds have a great wisdom - they know that they are just a step on the evolutionary path, so they created a human.
It seemed that the evolution has come to an end. But no.
Humans are big dreamers, whose goal is to know the Universe and discover new planets. EcoBalance has three of them, yet each one is unique!

Humans decided that the dream is fighting for, gathered the crew and impatiently waited for the rocket. And it did take them to space to face the new adventures on other planets!
Aliens became afraid that humans, which, while wandering the Universe and inhabiting other planets with creatures from their home planet, will destroy them. Thus they have started to steal humans and bring humanoids undercover. But aliens can be conquered. How would you do this? Play and learn!

Game functions:
1) The world of the EcoBalance logical game contains three planets, each having several fields-”continents”. Each planet has the unique geometry of the field cells. The first planet you start with, Earth has the continents, composed of hexagon cells.
2) Natural events, such as tornado, earthquake, meteorite, etc. become obstacles on your way to leadership. And remember about the snake, which sneaks into your way to keep the balance.
3) From time to time, a UFO comes to the planet and drops aliens. They have a secret. So the only advice we have for you - be attentive and do not forget about “ecoboom!”, as it applies to all creatures in the game.
4) You don’t need to stop after launching three rockets. You can stay as long as you want on one continent, breaking records and aiming to get to the top of the leaderboard.
5) If the game becomes too hard to master, you can use the magical help from one of the helpers. But helpers need Ecoins.
6) Collect points and convert them to Ecoins after each rocket launch.
7) Compete for leadership with other EcoBalance players, become the best, get Achievements and coins for your successes, and learn the results on the scoreboard. Become the real pro in keeping the world’s balance!